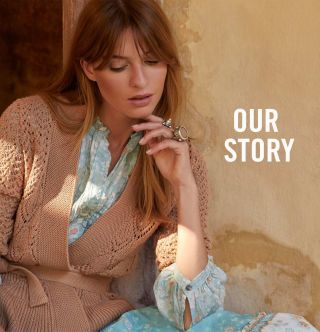 Odd Molly is a Swedish clothing brand founded in 2002 with a vision of producing clothes that symbolize female strength, courage and love. Our garments are lovingly created and characterized by high quality, colors, patterns, natural materials and handmade details. The brand has taken inspiration from Molly, a woman who lived a bohemian skating life in Venice Beach in the 80's. Molly is brave, breaks conventions and follows her heart in whatever she does. She is humble and caring - she is a symbol of what Odd Molly represents. Odd Molly wants every woman to be her best self!

Founded in 2002
Headquarter: Stockholm, Sweden
Listed on Nasdaq OMX in 2010

• Odd Molly launches an ambassador collaboration with the artists Neneh Cherry and Titiyo. Advertisements on the artists in this Spring's Tribute collection rolls in Stockholm's subways, at bus stops around Sweden and in several newspapers.
• February 7, Odd Molly opens a new store at NK, a high-end warehouse in Stockholm, Sweden.

• The retail industry is changing and Odd Molly likewise. This year we have been working to strengthen our customer offering, user accessibility and further focus on digital sales.
• Jennie Högstedt Björk is appointed as Odd Molly´s new CEO in August 2018.
• Odd Molly continues to make ongoing changes and adjustments to the organization with the aim of optimizing processes and increasing efficiency. The profitability of the various sales channels is in focus and the company is working to adapt its presence in different markets based on conditions and potential.
• Odd Molly is the proud sponsor of the successful music festival Queens of Pop, which takes place in Helsingborg and in Uppsala. What distinguishes the festival is that it is only female artists who participate as for example Zara Larson, Icona Pop and Sarah Klang.
• Odd Molly initiates a successful collaboration with Heja Livet (a social network for women) and organizes a sailing trip with young female entrepreneurs to Greece.

• 2017 will be a year when we take measures that costs in the short term, but which promotes the goals of strengthening our position in the Nordic region and expanding Odd Molly's lifestyle concept internationally.
• E-commerce drives growth.
• New product lines for underwear and baths have been developed, both of them were received very positively by our customers.

• The Tribute collection, our most exclusive pieces, are presented to new markets
• Continuation of opening 3 stores and 8 shop-in-shops in Sweden

• The company is founded by Karin Jimfelt-Ghatan, Per Holknekt and Christer Andersson
• Wins International Baltic Fashion Awards, Prêt-à-porter, in Germany
• Opens an office in Los Angeles and holds a fashion show in Hollywood, USA 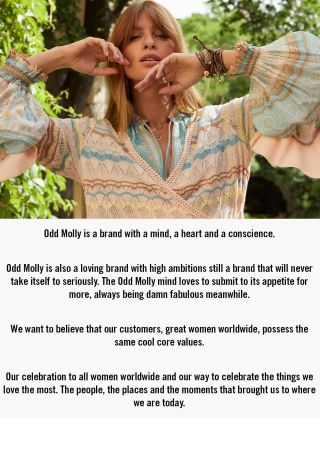